Success Means Never Being Afraid Of Being Inspired By Others

There’s no question it’s important to put our own personal stamp we do on work. However, there’s no reason to get bogged down by the fantasy that everything you do will always be completely, 100% original. There’s almost no chance it will be, in the vast majority of cases.

All humans are either directly or indirectly influenced by others. Generally it’s the people they most admire who have the largest imprint. There’s no shame in that, either. It’s proof that mentoring takes place between people who have never met. When strong ideas are presented in the marketplace, they are very likely to be implemented by the vast majority of market participants.

Anything that gives people an edge is copied as soon as its existence is discovered. Look at how quickly esoteric training routines and “supplements” proliferate among elite athletes. It’s not hard to understand how this happens. The athletes who ignore winning trends will soon find themselves off the team. Those who use the same methods as their other competitors stay in the game.

Inspiration Is an Excellent Starting Point 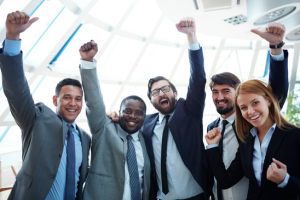 Get Inspired and Win!

Inspiration should serve as a starting point for your work. You cannot rely completely on others and their work, even if you decide to imitate their best qualities. No matter how hard you try to be like someone else, your own personal style will shine through. When you achieve mastery in your craft, something that is uniquely “you” will shine through. The only way to get to that point is by working through the time when you’re learning the basics.

The idea of inspiration probably explains why certain families have multiple siblings that excel in the same pursuits. This is true of musicians, athletes, and numerous other professions. There are families where every member for generations have been lawyers. Although genetic abilities pay a certain role in this coincidences, it’s fair to say that influence played the largest factor. It’s likely the children were influenced by their successful parents to follow them into the same profession. The children were inspired enough to model themselves after their role models, but with their own unique flair. That approach is powerful, and their success proves it.

Inspiration fuels your drive and modeling your skills after work or people you admire keeps you focused on being the best. In your mind you’ve identified certain people as the best in the field. That’s the reason you’re inspired by their work.