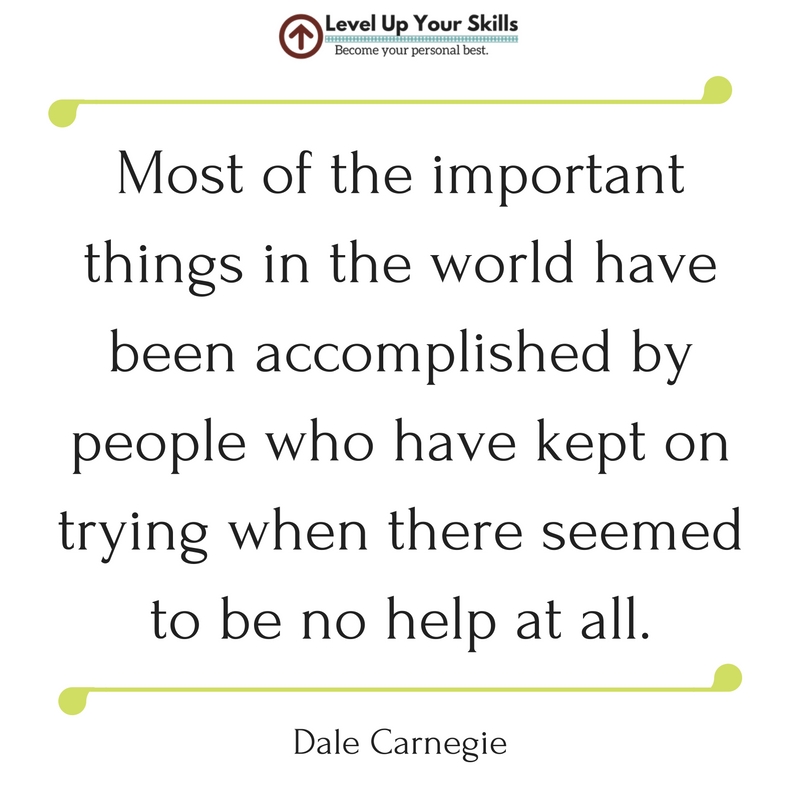 Stay Strong, Keep Your Attitude in Check, and Reach Your Goals

In the realm of personal development, few individuals have been as influential as Dale Carnegie.

Carnegie had a strong belief in his philosophy because he overcame poverty himself.

Dale Carnegie didn’t espouse a credo of passive luck. Instead, he taught all who would listen that they had to put in work. He told his students that they needed to improve on some skills to succeed.

Dale Carnegie also knew that persistence was the determining factor for the biggest achievements. That’s why the subject came up so often in many of his most famous quotes, including “Most of the important things in the world have been accomplished by people who have kept on trying when there seemed to no help at all.”

You Have the Power to Shape Your Future

Individuals who give up because of discouragement don’t realize their visions. This emphasis on staying on track despite difficulty reoccurs often. It’s easy to see why. Over the years, most people who shocked the world did so after a lot of “trial and error.” Nobody can be right all the time. Those who feel sorry about failure often struggle to succeed.

If you set out to grab life with gusto, expect no help. You may find plenty, but why worry? Many people will either openly oppose you. Some will silently do the same. None of that matters in the end. With enough determination, you won’t need other people to stay confident. If you know you’re working your hardest and holding nothing back; you will remain resolute.

As your journey progresses, it becomes easier to find the right people to help. They will show up when you’re well on your way.

Your future is waiting for you. Shape it, however, you want. Take control of your actions and attitude and make things happen! There will be trouble and delays along the way. In the end, though, the results will make an effort worthwhile.